Articles From:
For Women Rider's World Relay Newsletter:
December 2018 Edition: Pushing Boundaries: Long Distance Riding
"When I ask this question, I receive any number of answers ranging from a few hours to all day, 200 miles to 1,000 miles. Most commonly I hear a couple hundred miles followed by admiration, or crazy looks, for what I’ve done in my riding career. Long distance riding is something just about anyone, health abiding, can do and I’d like to encourage you to try it for yourself."

January 2019 Edition: Pushing Boundaries: Getting Back on the Bike
"My first wreck happened when I was 23 years old, in 2015. I was on a beautiful Victory Kingpin, going from my house to see a friend less than two miles away. Right after an intersection, a Ford F250 pickup truck tried to cross all four lanes of traffic while blind to the oncoming side. I hit his rear panel, flew forward, and sustained a cracked rib along with needing 17 stitches to repair my right knee. Fortunately, the physical battle left me with no long term damage and able to walk properly after about a month. The next hurtle was the mental battle: I had to contemplate whether riding meant enough to me to do it again, whether I could do it again, and whether I would come to enjoy it again."

February 2019 Edition: Pushing Boundaries: Getting Back on the Bike... Again
"When I had my first wreck I was fortunate to not have any major physical injuries so I could focus on the mental troubles of riding again. In December of 2018, I had my second major crash, one where I’m currently dealing with injuries to my body that affect my ability to ride. Both wrecks have challenged me and taught me different lessons."

March 2019 Edition: Pushing Boundaries: Riding After a Break
"There’s plenty of things that can come between us and our motorcycles; family obligations, bad weather, injuries, a heavy work load. That time off of our machines is prone to causing anxiety and apprehension about getting on again. What if you forgot how to ride? What if you drop it because you’re out of practice? These are common thoughts for everyone after a break from riding but it’s not as bad getting back on as we think."

April 2019 Edition: Pushing Boundaries: Wrenching Your Bike
"One of the most dreaded times when it comes to motorcycles is when it’s time for maintenance. It can be costly to take it to a dealer, deprive us of our machines during precious riding season time, and sometimes our machines are “too old” so they won’t work on them. The other option is to learn how to work on your own bike, which is very intimidating at first. If you can get past that first big step, wrenching on your own bike will build confidence and self reliance while bringing you more trust in your machine."

May 2019 Edition: Pushing Boundaries: Motorcycle Ergonomics
​“Looking back to my first motorcycle, a Honda Shadow VLX, I thought it was the best, most awesome, comfortable bike ever. It’s a common thought among new riders, I was no exception, and I wouldn’t hear otherwise. Little did I know, when it came time to shop for a new bike, that I’d find a whole new world of motorcycles out there. The differences in seating positions, suspension, weight dispersement, and engine styles makes every ride unique. Now I support every rider trying out as many bikes as they can get their tush on, not only for the experiences and for learning what works for you, but because it teaches you about the different cultures in our community too.“
​
June 2019 Edition: Lessons Learned Riding in the Extremes
"The day began beautifully on the Million Dollar Highway in Colorado as I rode north from Silverton. The scenery was breathtakingly gorgeous so I couldn’t pass up the opportunities to frequently stop and take photos. Before long, I started noticing the sky darkening and the temperature rapidly dropping. Bear Creek Falls was the last scenic view before Ouray, and was also right before the road would drop out of elevation. As I was gearing back up after snapping a few shots, a massive wind started washing thru. It was so strong that my bike was almost knocked over and I knew I had to stay for what was coming. I moved my bike with the kickstand side facing a concrete barrier and hunkered down between. The winds kept up until the rain started, and then the hail began."

July 2019 Edition: By the Helping Hand of the Motorcycle Community
"Even though it was Texas, December was still a cold month when I took a ride down to Big Bend National Park. The trip from California was going pretty smoothly until the morning before I got to Big Bend. From out of nowhere, my bike developed a front end wobble at higher speeds. I looked all over the front, checking my tire pressure, forks, triple tree, everything I could and nothing seemed wrong. It was worrisome but being the hardheaded woman I am, I continued on. The day warmed up as I crossed the park entrance and headed for the furthest point in the area, which was recommended as the best spot for views, Santa Elena Canyon Overlook. As I stopped at a few other spots along the way, I noticed my bike handling worse and worse."

August 2019 Edition: August, A Month of Change
"It seems that it’s Anniversary August for both the Women Riders World Relay, and for myself as well. On the 29th of this month last year, Hayley Bell conceived of an idea to bring about change in the industry for all women riders around the world. On the 5th of August in 2017, I hit the road to change my life into something better than it was. Maybe there’s something about August that inspires you, or maybe it’s just a coincidence."

September 2019 Edition: Riding in Romania
"Romania is a beautiful country that many Americans know very little about, and that I just happen to be riding this month. There’s spectacular scenery from the coast line with the Black Sea to the Carpathian Mountains, with waterfalls, lakes, rivers, and caves scattered all around. Accommodations are cheap ranging from wild camping, paid campgrounds, shared hostels, and higher end hotels. The food is delicious, it’s easy to buy locally grown, and is much more affordable than in the states. These are all the logistical reasons that Romania would make a great place to adventure but there’s also a rich motorcycle culture to explore."

October 2019 Edition: Why a Monkey Run Could Change Your Life
"Maybe you’re wondering what a Monkey has to do with motorcycles, so I’ll start with telling you that the Monkey craze has been happening since the 1960s when Honda came out with the 50cc Z series of mini bikes. The official name is the Z50 but was coined the “Monkey bike” because of how you look when you sit on them. To this day the originals often sell for more than their first selling price and China has taken up making some cheap copies of their own."

December 2019 Edition: Pushing Boundaries: Taking an Off-road Training Class
"It’s crazy how situations can line up to where everything falls perfectly into place, but that’s exactly what happened November 23rd. Kris Fant, a writer for Women ADVRider, and her husband, Nathan, set up a “Novice & Beginner’s Off-road Riding Training Day” at their house in Portland, Oregon. Many people think that because I’m a world traveler that I know how to ride off road... But I don’t. I started out on the street and have slowly been learning how to handle myself off-road over the last year. So when I found out about this free lesson, I was ecstatic to get my chance to officially learn some new tricks. Plus, it’s a wonderful opportunity to meet some new friends."


Articles About:
- Meet Zee. She Rides, She Travels, She Doesn't Mess Around. By Jo Kelley at RumbleOn
- Did You Say... Naked? by Kate Murphy at RideApart
​- Bunk-a-Biker: Zee Traveler Tells All! By Kris Fant at Women ADVRiders
- A mention of my Honda CB500x with the mailbox at Horizons Unlimited in CityBike Magazine

Other:
A call in interview to Motorcycle Mayhem Radio on 9-24-18
Two presentations with Horizons Unlimited at the 2017 Mariposa, CA Traveller's Meeting 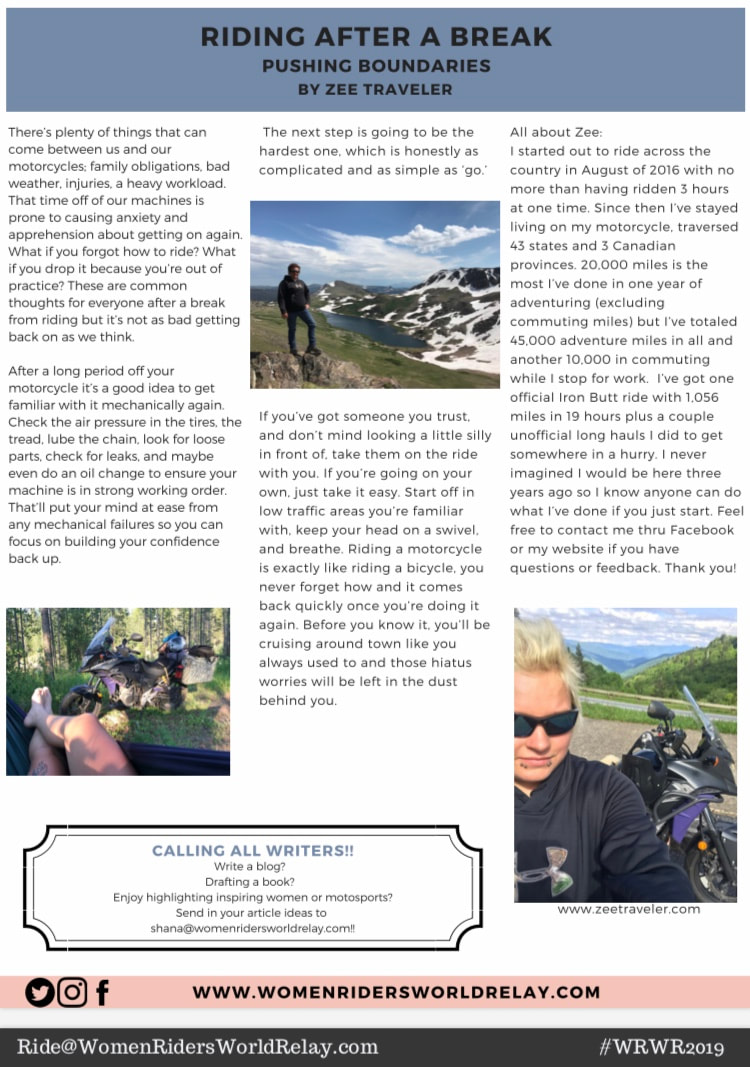 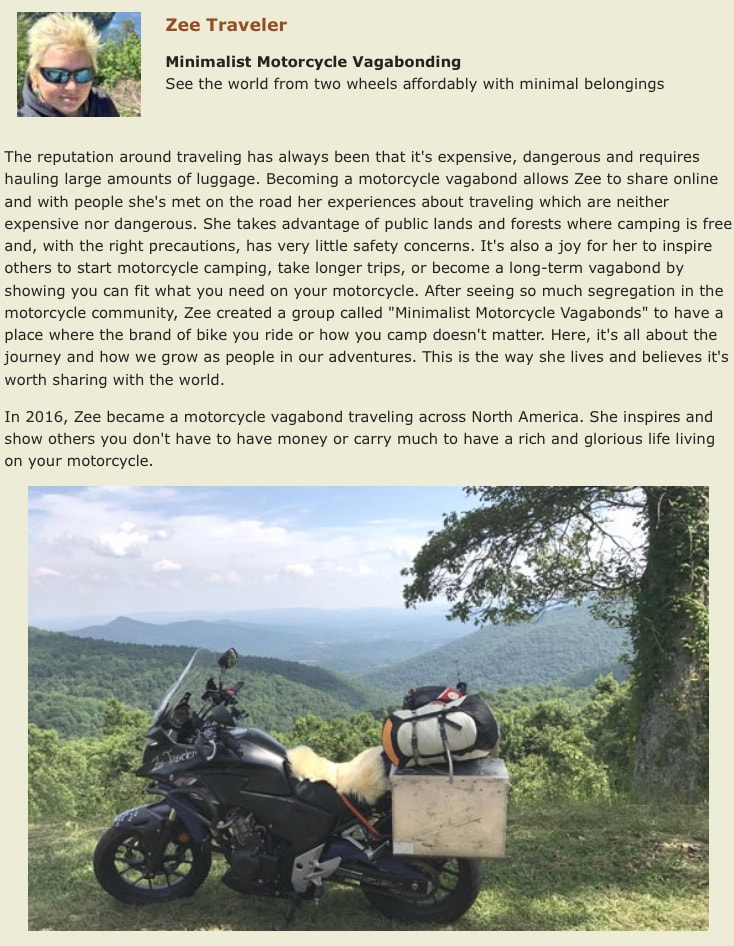 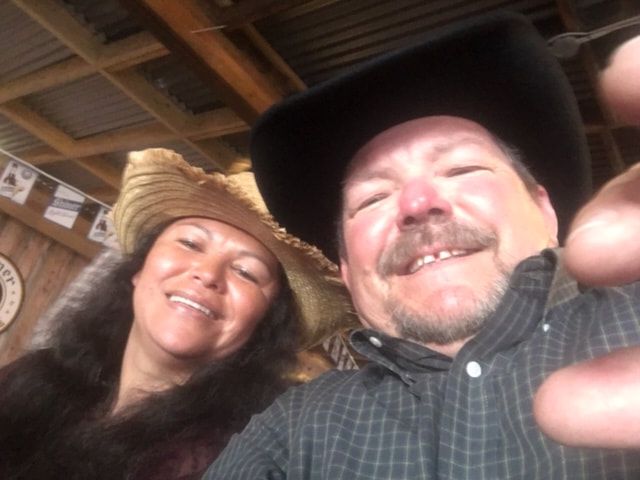